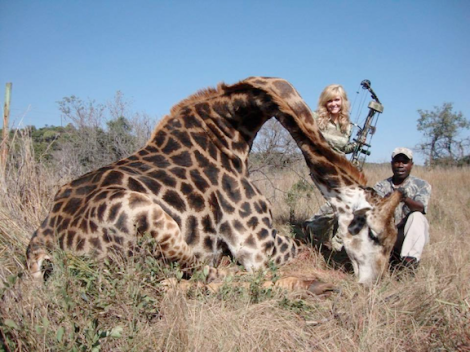 Rebecca Francis poses with the dead giraffe. (Image via HuntingLife.com)

(This is an excerpt of an article that originally appeared on Planet Experts.)

On Monday, comedian Ricky Gervais tweeted a photo of a hunter posing with a giraffe she had killed, with the caption: “What must’ve happened to you in your life to make you want to kill a beautiful animal & then lie next to it smiling?”

As of this writing, Gervais has 7.57 million followers on Twitter. Understandably, his comment set off quite a commotion.

The internet exploded on both sides of the issue, with many of Gervais’ followers scolding the hunter, Rebecca Francis, and some even making death threats. One commenter wrote, “I would love to permanently erase that smile. May she get all the cancers and diseases that she deserves.” Another asked, “seriously when can start [sic] hunting morons like this bitch? #Animalsarebetterthanhumans”

Hunters, meanwhile, rallied in Francis’ defense. On HuntingLife.com’s Facebook page, Ron McKnight wrote, “Hunting is legal, and without the money spent on licenses to pay for wetlands, etc, animals would overpopulated etc! So all you veggies, and pita people, get over it and leave her alone! Geez worry about yourself! If you paid thousands to hunt, you would take pictures too! Again leave her alone and get a life.”

After Gervais’ tweet featuring Francis with the giraffe was retweeted tens of thousands of times, HuntingLife.com contacted Francis for a statement. According to Francis, she was asked to kill the giraffe by the local people. “He had been kicked out of the herd by a younger and stronger bull,” she said, and “was past his breeding years and very close to death.”

Francis also claims that the giraffe’s carcass later fed the locals. “I chose to honor his life by providing others with his uses,” she said, “and I do not regret it for one second. (The locals) did not waste a single part of him. I am grateful to be a part of something so good.”

HuntingLife.com has also defended Francis from critics on their Facebook page. To one commenter that pointed out her smiling and posing with an animal that was allegedly being used as food, the site responded: “To a hunter every animal they take cleanly and ethically is a trophy and a memory that will last forever. We are prideful the human species [sic] and we have been documenting our hunts for the last 75000 year [sic] in petroglyphs and now in photographs. Nothing has changed.”

But the debate did not end there. The animosity directed at Francis reached such a pitch that the hunter was compelled to issue a second statement on Thursday, April 16:

“I feel it is my obligation on behalf of myself as well as my fellow hunters to respond to the mass criticism I have received over this issue,” she wrote. Francis stood by her right to hunt and that “[t]here is no question that hunters contribute the most to the welfare of wildlife.”

From that point, however, Francis argues that hunting has ceased to be the real issue and that Gervais is targeting female hunters. “Ricky Gervais has used his power and influence to specifically target women in the hunting industry,” she wrote, “and has sparked thousands of people to call for my death, the death of my family and many other women who hunt.”

Francis then goes on to make very valid points about the indecency of threatening her and her family, writing, “In a country that was created on freedom of beliefs, it is hard to comprehend that people are so intolerant of each other that they promote vile, disgusting, and explicit ways to invoke death upon others.”

Yet she concludes that she “will never apologize for being a woman who hunts.”

Unfortunately, by conflating the vitriol directed at her with Gervais’ intent, Francis has only added fuel to the raging flame war between hunters and their detractors. While the same cannot be said for Gervais’ followers or Francis’ critics, Gervais has made it very clear that his disdain for Francis is based on her actions, not her gender.

Read the rest on Planet Experts