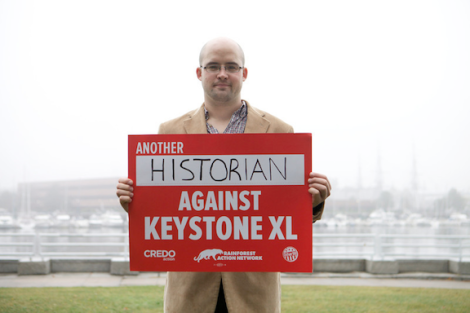 Recently, this has become the central focus of the KXL debate: How many jobs it will create for America.

This may have to do with the fact that oil prices are currently hovering around $50 per barrel. Are we approaching the end of the oil era, as Dennis Gartman predicted back in October? That remains to be seen, but it’s relevant because a State Department analysis of the KXL noted that if oil prices were to drop to $75/bbl, the costs associated with Canadian oil sands might make the pipeline financially untenable.

“Tar sands only makes sense in a world of high oil prices,” Anthony Swift, of the Natural Resources Defense Council, told InsideClimateNews. “We’re in a world where cheap transportation by pipeline makes or breaks even the cheapest tar sands project.”

So, with oil prices down and staying down for the immediate future, KXL proponents are trying to sell the pipeline on how many jobs it will create.

The number that gets touted most often is 42,000. This is how many jobs the pipeline would create according to the U.S. State Department’s report (the actual number is approximately 42,100). However, like most things in politics, the nuances of a statistic are the first things to be scraped off when carving out a juicy soundbite.

How long will those 42,000 jobs last? Diving deeper into the State Department’s report, the bulk of the KXL jobs would exist for four- to eight-month periods and the majority of them would be seasonal and construction-related. In actuality, some 3,900 jobs would be created that lasted more than a year.

In fact, when all is said and done and the $7.6 billion project is completed after two years, the State Department reports that a total of 35 permanent employees and 15 temporary contractors would be left.

Read the rest on Planet Experts.